Making changes to a Jenkins instance that has been around for a while can make even the most experienced developers nervous. Jenkins configurations tend to have a number of things in common:

A reasonable way to deal with this anxiety is to backup the configuration. Fortunately, that’s easy with Jenkins. Simply point your browser to http://localhost:8080/job/deploy-prod/config.xml and save the XML (example below) to disk.

A backup is only as good as your confidence in restoring it, so it’s a good idea to take a few minutes before making any of those big changes and see if you can restore the configuration. I’d suggest changing the description, as it’s a low-risk update that is easily visible. To restore your configuration, you’ll need a tool like Postman[1], where you can paste the XML contents in the body and POST to http://localhost:8080/job/deploy-prod/config.xml 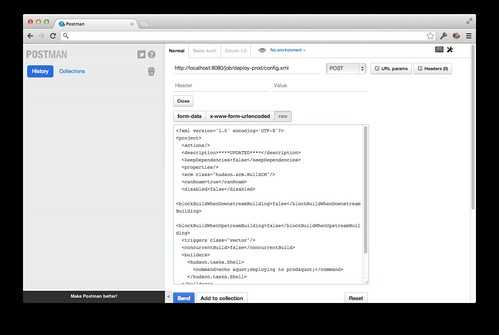 This quickly becomes a repetitive and mundane task that is perfect to automate — which is exactly what I’ve done for the grunt JavaScript build tool.

After installing grunt-jenkins[2][3] from npm, include it in your grunt.js gruntfile and add the jenkins configuration block:

This command will contact your Jenkins server, get a list of all the jobs, and save every configuration to pipeline/job-name/config.xml.

To see how restoring works, make a small change to a job’s description in the XML and run:

Now check out your change on the Jenkins server. Pipeline configuration instantly has the respect it deserves in your source tree.